Need I say more? I think the city inhabits a different reality. Watching the media circus taking place is instructive. One is left wondering whether anything will ever get better or change. The more you look at what’s happening in the nation’s capital, the more discouraging or demoralizing it can be. You keep hoping that politicians will put the nation first but once you turn on the news, reality sets in and the show goes on!

So let’s get off that track and look at a new path. Washington will be Washington, but your reality can be so much more! You can start by letting go of old norms and ways of thinking that keep you stuck. You’ve been told so many times that being your own boss is too hard, that it’s not possible, or that you need millions of dollars in capital to get started. Rubbish!!

Let Financial Education Service show you how to create wealth on your own terms. Contact an FES agent to find out how easy and satisfying it can be to chart your own destiny, write your own vision, and walk a path you designed.

Stop second guessing the decision to be happy.

You can be the captain of your very own ship…literally! So start here. Make a plan to be happy and love life again…even if Washington has lost its mind!!!

I have been reading and listening and contemplating many of the discussion outlets and forums concerned with the Affordable Care Act.  Arguments are all over the map.  Passions for and against are high and all parties seem unequivically solid in their conviction about the good or bad of the new healthcare law.  Common ground is extremely rare in many of these discussions, but I want to point out that sharing is caring and that is what we should be about as an evolved and compassionate society.

What seems to be missing from many of the discussions I have seen is compassion, compassion for the guy or gal next door, the single parent, the child of that single parent and so on.  There doesn’t seem to be much room for inclusion of the least among us these last days.  The discussion always seems to center on an objection to paying for something that doesn’t directly benefit me…the individual.

I was listening to a radio discussion on the Diane Rehms show on NPR and they were talking about how many people were upset about having to buy a healthcare policy that included benefits not directly related to them or their condition, i.e. a guy having to buy a policy that covers child birth.  I can understand the confusion but I think the point is being missed.  United we stand but divided we fall remember and sharing is caring in my book.  Having compassion for someone other than yourself is what I deem a signature facet of a superior society.  It’s the healthy society that survives the longest and when we get to the point where we only think about what’s in it for me, well then we’re on our way to oblivion.

I believe we are stronger when we consider the whole and not just the individual.  I believe we are most ready to stand the tests of time as a society, as a species, if we ensure that there is no weak link in our chain of humanity.  So yes, it may cost more to buy a healthcare plan but in the long run it is actually cheaper for the whole of society because it’s always been easier to stop the bleeding when a pin prick is all we have to deal with vice a severed artery.  When we don’t take care of the least among us, we will over time have to tend to those who have been gravely wounded via neglect at grave cost, a cost that could have and should been avoided.  In today’s world can we really afford to not care about one another?

Personally, I would just like to give the new healthcare law some time.  The program website certainly needs some major help but I’m an optomist.  I believe it will get fixed and eventually we will all see some good results, results that will benefit the whole and not just the individual.  Sharing is caring and that is a joyous message that we might want to remember especially during these holidays.

Today I turn to the sad topic of the civil war in Syria.  I know the latest incident is being broadcast all over the news networks.  CNN and others (Washington Post, NY Times) have reported that the Syrian government shelled and killed more than 1,300 people using chemical weapons in some instances.  The reports have stated that there is no direct evidence as to the use of chemical weapons in the attacks but video footage provided by rebel forces is emotionally wrenching and compelling.  The Syrian government has denied the use of chemical weapons.

When I heard this news report this morning, I was at a loss for words.  My reaction was neutral at first because well, because it seems like these kinds of reports are becoming common when it comes to the Middle East.  After hearing more and more about these reports, I started to ask myself the question, what kind of government does that to its own people, especially if they’re trying to regain popular support??  Has the Government Gone Mad? Doesn’t an attack like this play right into the hands of the opposition?  If the Syrian government wants to portray the factious opposition groups as the real enemies of peace and stability in Syria, how is their argument aided by such a blatant human rights violation as the use of chemical weapons on unarmed civilians?!  If true, does this uncover the true face of the Syrian government and its leaders?  I think it would, sadly.

But what if this isn’t the case?  What if no chemical weapons were used and the whole thing were staged for the world?  After all, information is still being gathered, the United Nations has no teams on site and most of the reporting is coming from anti-regime activist groups (as reported by CNN).  What would the benefit be if such a dramatic event were staged by the groups opposed to the Syrian government?  Increased aid perhaps, more weapons and sympathy for starters.  What’s the downside for such a gambit?  Opposition groups would lose credibility, future aid, and the Syrian government would gain support and no longer be viewed as a Government Gone Mad. 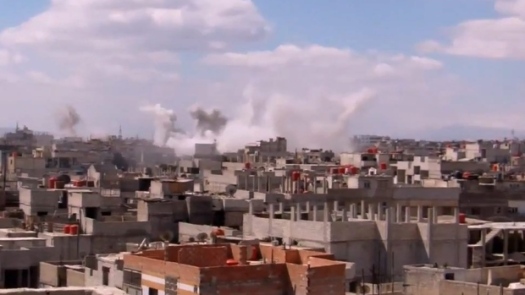 The only winner here would be the rebels if this report turns out to be true.

So why am I really blogging about this?  I just think it’s so very sad.  I think that it’s horrifying that a national government would rather shell and bomb its own people with chemical weapons than sit down with them to discuss possible solutions.  I also think that it’s disheartening that those in Syria who oppose the government of Bashar al-Assad would rather inflict great emotional trauma on the country by staging something so horrifying than seeking redress through whatever legal channels are available.

Ok, I just slapped myself.  That last paragraph made no sense what so ever (smile).  The Syrian government’s opposition is out gunned in nearly every way and there are no legal channels for redress.  What tools do they, the opposition groups, have at their disposal?  It seems to me that it is very unlikely that Syrian opposition groups would stage such an attack.  Without any on-the-ground evidence, it just seems illogical that the chemical attack would be staged.  Maybe the number killed is inaccurate but it is more likely that chemical weapons were involved.

So in my final analysis, it seems more likely that a government struggling to hold on to power by whatever means necessary would launch a chemical attack against its own citizens.  I agree, it makes no sense at all but given the history of the Bashar government I believe it more than plausible that such an attack scenario took place.  And, if true I am disquieted by what this conveys about that man and those in power with him.  In these last days, and with respect to that area of the world, one might want to dust off the book of Revelations and revisit its pages for a little perspective.  I get chills just thinking about it.

Gospel-Centered Resources For The Gospel-Driven Life

Let everything that has breath praise the Lord